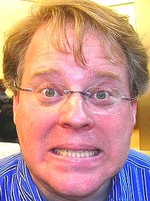 Superstar blogger, Robert Scoble is leaving Microsoft. But, he still loves the company.

"No one at Microsoft has complained to me about my views for a very long time. In fact, the harsher I got the more support I got.

"Friday I visited with Jonathan Schwartz, CEO of Sun Microsystems. Management and Microsoft didn't say a thing about that.

"Imagine if your employees went to your fiercest competitor and had a very public lunch, wouldn't you be up in arms?

Not at Microsoft. At Microsoft I am encouraged to change the world and make things better for our customers.

It is the best big company in the world (and I've been lucky to meet and study quite a few of the world's best).

GRETCHEN LEDGARD, another ex-Microsoft blogger reports a different experience when a lively rant was picked up by
C-Net.

"I kept hearing this one little rumor that the higher-ups at Microsoft (?) were not pleased with me. You never can tell. It was just hallway chatter, and I was certainly the topic of conversation in Building 19 for a few weeks.

But rumors get to you, and I’d be lying if I didn’t tell you that my first seed of inspiration to actually leave Microsoft and found JobSyntax was planted at this time.

I still loved the company, but something seemed amiss with our relationship. They didn’t fire me, but I felt cut off. I was putting myself out in the public eye everyday, and I wasn’t sure they had my back. I’m still not sure they ever did.

It sounds as if Microsoft gives a lot of free rein to its bloggers. They do, however, get negative feedback which can be un-nerving.

But, why did The Moongal feel less support than Scobie? Well, while Gretchen was certainly very popular, ZD-Net calls Scoble the most famous corporate blogger in the world .

Truly the fair-haired boy, his departure from Microsoft was reported in Britain's Guardian Unlimited. And, when you're that famous, maybe you don't care if someone doesn't like you. And, maybe they're too afraid to show it.

Scoble also had a huge impact on my desire to join Microsoft, even though I took a field job and have never been very close to the center of the action. I know that Scoble had a major impact on people joining the company and was a major recruiting benefit- he cast Microsoft in a very positive light.
-- Randy Holloway Unfiltered

Got to gamble to get ahead
This is a negative for Microsoft. He was a human voice for the company. A non-developer who schmoozed with developers giving us the every day geek’s point of view of the products and services.
-- MakeYouGoHmm.com

That's a very big deal indeed.
Holy crap Robert! I'm a bit stunned actually. I knew the day would come, but didn't think it would happen so soon. Only last week I was London and hearing from Microsoft customers about how you have helped change their perception of Microsoft to be a more trusted company, citing your blog as the primary reason...

Dude, you've also changed the the culture of the company for the better. You pushed the boundaries, and gave the rest of the Microsoft blogging army the courage to get out there, be publicly self-critical, acknowledge our competitors (even compliment them publicly!)....
-- Alex Barnett

Robert Scoble was a major player in changing the face of corporate blogging. He did more as a blogging employee for Microsoft than any other PR endeavour they have undertaken to date.
-- BizPodcasting

CurryBet.net
Was American techie changes jobs really the ninth most important news story in the UK this morning?

BullWinkle
Scoble is making a risky jump in joining such an unknown company. As the NY Sun notes discussing really big pianists, sometimes it’s better that these things are “appreciated but not attempted.” And sometimes the only way to know is to try. Bonus points for people who get the joke.

Seen Enough Scoble Stories Yet?
Scoble decides to leave Microsoft and it seems every other headline in my newsreader has his name in it. Cut it out. Scoble’s an interesting guy, but he’s not the only blogger on the planet. Nor is he, as one wag put it, a “pioneering” blogger. The pioneering days of blogging were over by 2000. Scoble’s move may, or may not, mean something for his new startup, but the net impact on Microsoft will be zero, especially in the one area that really counts: sales.
StrayPackets

Scoble quits his way into the MSM
It must really be International Scoble day... I just saw a copy hit our Reuters feed (”UPDATE 1-Famed Microsoft blogger leaves for start-up”). I think too much has been made about the move. Scoble, of course, has been great for the company, helping it change its image from a monster to a bit more likeable firm
Blue Screen of Duds