The slow, steady use of a network.

2. Every day, ask a different friend if she knows anyone in any of those companies, industries or cities whom you might speak to.

3. Call your new contact, tell her what you're after and ask if she knows anyone you should speak to who might help you.

4. If she doesn't, ask for a referral to someone who might know someone.

Comment:
This is beyond most people. They know that their friends are not eager to sic a job-hunter on their acquaintances. And, they dread the idea of putting those friends on the spot.

Kawasaki: Be Ruthless About Personnel Issues

But only in emergencies

Don't fire people just to show you can take care of problems quickly. Give them a second or third chance.

You have a moral obligation to give everyone a chance to change their ways and to succeed.

If you throw your weight around, you tell everyone that they are there at your whim.

When the company is in a do or die situation, however, you must have people who can do their jobs well.

If someone can't do her job, move her to a position she can handle. If she can't handle a demotion, let her go -- even if she's your best friend.

The Toronto Star is now featuring comedienne, Sabrina Jalees, in its entertainment section. Her racy language reflects the alternate more than mainstream media:

"Tonight, after yoga, as I faux-confidently stepped out of the communal shower buck-naked, a girl called out, "Are you Sabrina Jalees?"

I turned around to greet my new friend/fan, trying my damndest to maintain a non-fazed-about-the-fact-that-my-ass-is-bare attitude while answering, "Yup ... and this ... is my vagina."

For someone who shook Mel Lastman's hand when she was 12 and gloated about it as if it was Brad Pitt's schlong, this has become an especially exciting new aspect of Sab-life."

Her articles offer a direct link to her site. Once you get past the entry page, what's the first thing you see?

"Sabrina is on Myspace! Be her friend by adding her at www.myspace.com/sabrinajalees

There are two reasons to answer no.

1. They won't last.
2. They are not structured for business relationships.

Chris Taylor, the Heroic Techie tells us that it's the revenue model -- not the size of the audience that determines success.

Woodstock had a large audience of people who didn't want to spend any money. And the same is true of MySpace.

It's got a lot of customers who won't support its advertisers and will leave as soon as the novelty wears off or something new comes along.

The Techie even has the temerity to take on LinkedIn. It has an audience that is willing to spend money but as it grows it will be subject to the bozo invasion. And, once there is a lot of dead wood on its shelves it won't be that useful or popular.

The Techie cites party-lines, bulletin boards and IRC among the once hot now not methods of social interaction and believes that MySpace will follow in their wake.

And, CNET plays much the same tune though it gives more of a hearing to MySpace' claim that it has all the features of a major portal now and will add even more to hold its audience as it matures.

According to her, MySpace is no good to recruiters and candidates because of the questions it asks when it creates your profile.

It wants to know your marital status, sexual orientation, religion and smoking and drinking habits.

This makes it clear that MySpace is not primarily about business but leisure.

When you send a long URL via email, it often gets broken in two.

Most recipients aren't bright enough to paste the parts together in the Address field.

So, shorten your URL at TinyURL.com . 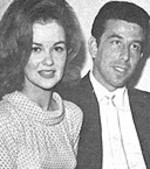 In the late 50's Adler was in partnership with Herb Alpert managing Jan & Dean. He wrote songs under the name Barbara Campbell. Sam Cooke's Only 16 is his.

He founded Dunhill Records to which he signed Barry McGuire, The Grass Roots and the Mamas and Papas. He produced Johnny Rivers who was not on Dunhill. He also founded the Ode label which produced Scott McKenzie and Carol King..

He married lovely Shelley Fabares in 1964 but is now married to Page Hannah, Daryl's younger sister. He owns The Roxy Theatre in Hollywood.

Protecting himself from t-shirt crazy fans

"Why don't you come up and see me sometime?"