For those of you even moderately interested... here's an update. Tomorrow is the last day of the program.
Monday, July 24, 2006

Thanks for putting on me on the blogroll, Dave.
(Hey, fans, in case you can't find me,
Recruiting Animal is tenth from the top).

Today he discusses a tough question that is usually left unaddressed. How do you shake an undesired networking request. (I had to look up the word "Padawan", but that's because I've never liked Star Wars - and neither should you!).

Note that Dave has mastered the Animal's lingo. Bravo Mendy.

Lizzie Borden over at Career Hub claims that she recently introduced Branding Guru, Paul Copcutt to the Six Degrees of Kevin Bacon. Lemme axe ya dis. What planet has he been on? Everyone from here to Turkmenistan knows about it. Hey, Lizzie, someone's been pulling your leg.

"Dear Mr. Animal, brother, I, too, am a Canadian. Please evacuate me from Minnesota." No, that's not what he said. It's not time for that yet. So, without further ado, here, for the Blog Swap, is an expat from Canuckistan, Steven Rothberg of CollegeRecruiter.com.

I am writing today’s blog entry as a guest of RecruitingAnimal.com who, like me, is a Canadian but who, unlike me, continues to reside in the Great White North. In 1988, I moved to Minneapolis for the weather.

This blog entry is part of a swap of blog entries organized by Recruiting.com. I am the President and Founder of CollegeRecruiter.com, a career site that focuses on entry level jobs and internships for college and university students and recent graduates. Although most of the positions on our site are available in the U.S., we do have thousands of opportunities in Canada as well.

I recently returned from a trip to Winnipeg, Manitoba, Canada. I grew up there and my parents still own a cabin / cottage a couple of hours away. While in Winnipeg, I was amazed at some of the differences from when I lived there. One of those differences was the attitude of students towards their summer employment opportunities. When I was a high school and university student in the 1980’s (I won’t get more specific than that), jobs were extremely difficult to find. Yet Winnipeg’s student job center has some 1,400 jobs unfilled because the students are declining to accept positions where they would be required clean carpets, wash dishes, and other menial jobs. The actual number of such positions available is even higher because many employers do not use the student job center.

The spread of HIV and Aids will knock almost a whole percentage point off India's average annual economic growth in the next decade, according to a United Nations-sponsored study released on Thursday.

The report – co-sponsored by India's state-run National Aids Control Organisation – is the first detailed explanation of the growing impact of the disease on India....

India has a proportionately low incidence of the disease but due to the size of its population, it is now the country with the biggest number of people affected by HIV.

The UN estimates 5.6m Indians have the disease, 90 per cent unknowingly.

"I am sure Jobster’s new backers must have been impressed with the chief’s frugal practice of eating his own dog food....

Thought leadership is one of the phrases, like “best-of-breed” and “mindshare” that have an Orwellian ring about them that simply agitates the rebel in me....

I predict.... a full-blown makeover for Recruiting.com where the disorganized recruitosphere... will be reduced to a Big Brother dystopia. ...

Dan Finnigan.... the rainmaker appears to be revisiting the magic formula.... everyone involved is going to learn a hard lesson about being in the right place at the right time.

Hey, everybody, I'm on the Career Hub today as part of the Blog Swap.

And, Louise Fletcher surprised me by adding a fantastic picture to my posting. Hey, Louise, thank you very much. 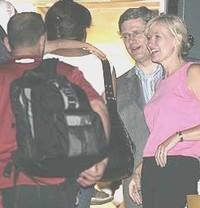 Canadians were surprised to find that 50,000 of their fellow citizens were in Lebanon when the hostilities broke out last week. (There were 25,000 Americans).

Since then, there have been many complaints that the Canadian government, which doesn't have the means to transport its own troops to Afghanistan, wasn't ready to whisk its citizens away.

And there has been a counter-reaction against fair-weather Canadians who obtain citizenship as insurance against hard times in their homelands but have nothing to do with this country unless they are in trouble and, alledgedly, ready to make demands.

In response, The Toronto Star published an editorial claiming that:
1. Canada is desperate for skilled immigrants.
2. We can't attract them without a dual citizenship policy.

Actually, The Star is not so straightforward. It actually says that we can't attract valuable immigrants if we demand that they break their bonds with their mother countries. But, in fact, no one wants that.

And, indeed, no immigrant would refuse to come here for lack of a dual citizenship policy.

People emigrate for two reasons: safety and money. If those concerns didn't trump ties with the homeland, few people would ever leave home.

This reminds me of an earlier claim that Dubya's foreign policy was driving valuable immigrants away from the USA. Yuk, yuk. (Photo: The Harpers greet evacuees boarding a Canadian plane).

Yeah, he did. Right here. But he still won't sell me a t-shirt!. Want more? See a funny review of a Canadian film. I hear Cheesman liked it. Nah, I just made that up. (Sometimes I do that).