How To Give Criticism

People can bear the unvarnished truth
when they know that you care about them.

Discrimination Against Gays in Military

Forward thinker, Abu Oudai, chief rocket coordinator for the Al Aqsa Martyrs Brigade in the West Bank, recently claimed that the Israeli army could be defeated, in part at least, because it was "full of gay soldiers and full of corruption." Whereof does he speak?

In 1983, the Israeli Defense Forces (IDF) adopted regulations which officially allowed homosexuals to serve in the military. Oudai may not be impressed with the prospect of gay personnel, but security and mental health officials for the IDF have found no evidence the long-standing inclusion of homosexuals in the IDF has harmed operational effectiveness, combat readiness, unit cohesion, or morale in the Israeli military.

Robert Merrill is a Technical Recruiter and Talent Consultant.

Robert Merrill is the author of Good Recruits.

Robert Merrill's birthday is on August 31.

If you're a good networker, you will wish Robert Merrill birthday greetings below.

Personnel Officer: So what is it? Do you need a second job? Are you moonlighting?
Travis Bickle: I... I just want to work long hours. What's moonlighting?

Constant Theme: Losers have the answers.

And the sign said, "The words of the prophets
are written on the subway walls And tenement halls"

I have seen the best minds of my generation,
starving hysterical naked.

"Alex [the suicide] was too good for this world."

Sorry to stray but this is irresistable. It was put out by the Canadian government in 1975. (Click to expand)

HOT TIP FOR A GREAT CONTEST.

He sez: Niche job board- blog convergence will only work if you get contributions from the target communities. But how do you get these guys to post?

1. Make it like American Idol
2. Ask each job hunter an Adlerian One Question Interview
3. Get 3 judges: nasty, nice & indecisive.

And read all the details here.

Jay-Dee & The Recruiting Animal at Starbucks 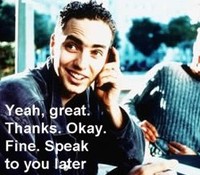 Jason: (on phone) Yeah, great. Thanks. Okay. Fine. Speak to you later. (turns to the Animal) That guy drives me crazy. He has totally changed.
Animal: Who?
Jason: You know I can't tell you that.

He's the chef recruiter but not the recruiter of chefs.

Here's a political blogger I like. He's American expat in London and a great debunker. But on Friday, he works in the kitchen and blogs about that too.

Now, Julie Stringer at Microsoft is a huge chef. And, our good friend, Anthony J Meaney is too. He can write about it well; I know that for a fact. But he won't do it unless there is an overwhelming demand.

A suggestion for ERE and Kennedy.

Hire Peter Altieri at WetJello (RecruiTV) to make you one of these. Post it on You Tube and use it as a promo.

I see after writing that some people found the framework of the skit insensitive. I can see that. But it could have been easily changed. So, you guys, use some other prop. (More on problems here and here).

Manaster:
Fun idea!... maybe the next time we'll get some of Conan's writers on it.

Reply: Animal will write one and sell it to the highest bidder. (You'd better start figuring out how you're going to handle the damage control now).