About The Recruiting Animal

Welcome to my battle
For business recreation.
I sweat and laugh and scream here
For the working population.

Based in Toronto, the Recruiting Animal worked as a busboy and taxi driver before drifting into recruiting.

In January 2004, he co-founded the Canadian Headhunter blog. In April 2005, he became a partner in Recruiting.com.

He is the author of Blast Your Way In - A Job Hunting Guide For Dynamic Professionals (unpublished) and Reach Out In The Darkness: Resume Tips for The Unskilled (in progress).

The Recruiting Animal is widely recognized as one of the top 40 thought-leaders in the world.

I listened to your show last night - boy my husband couldn't stand it. Your intro made me laugh so hard I nearly fell off the chair! My daughter kept asking me if the puppet was really talking.

I would NEVER say any of what you said to a job seeker myself, but I chuckled at your comments! Great interview, Great show! Thanks for the fun!

This is not a button down show that would appear on the Wall Street Journal. This is more my speed with some character, a free flow of ideas, and I think I said, “suck” and “damn” a couple of times. In other words I had some fun.

Shally Elvis Steckerl, What Everyone Ought To Know About Blogging (Jan 9, 2008)

I just got off the phone after a guest appearance on the Recruiting Animal show. It was a zoo, as usual, in a totally fun way.

On the last day of my "Writing for Public Relations" class at UNLV, I mentioned to my public relations students that I would be a future guest on an online talk radio show. They seemed very excited by the prospect and several of them asked for a time and date. "But wait," I said, "I haven't even told you whose online radio show... it's ... are you ready ... it's The Recruiting Animal Shooowww!"

Their enthusiastic expressions quickly turned to looks of sheer terror and inexplicable horror. Surely, their instructor had not lost all his marbles and taken to open discussions with someone who bills himself as "neither man nor wolf." "Don't do it!" they warned.

I think that so many recruiters blog because they know that it helps them get jobs. Granted, some of the more inflammatory blogs actually might hurt peoples' chances of finding work at certain companies - not to pick on anyone, but The Recruiting Animal comes to mind, although it could be argued that even the Animal gets some gigs or splits out of his efforts. Or maybe he's just completely insane... who knows?

While I eat my lunch at my desk, I often listen to Podcasts on recruiting. Unfortunately, not many Recruiting Podcasts are worth listening to because they are boring. I don’t know if it’s the voice inflection, tone or pitch, but I have hard time staying interested in the topics.

However, there is a Podcast that I will recommend and that is Recruiting Animal's Podcast. He is not boring. He does a good job of trying to be entertaining while talking about the recruiting industry. The only complaint I have about Recruiting Animal’s Podcast is that he shouts too much.

As I was working on Success for Hire, I had the good fortune to meet an excellent blogger and radio show host, the Recruiting Animal. Animal’s got one of the most hilariously combative shows you’ll ever listen to, and I had a great time as a guest earlier this month.

Tim Tyrell-Smith, How To Start, Maintain And End A Conversation With A Stranger (March 08, 2010)

I spent an hour on the phone last week.  Getting my teeth kicked in.... if you listened to my appearance on the Recruiting Animal Radio Show you may have an interesting view of my personality and strengths.

Early adopters, hard at work with their new toys, rarely see the long term value in the tools. There's a kind of narcissistic power that comes from riding the latest technology for your allotted fifteen minutes of fame. Sadly, most of the early users are more like Icarus and burn out long before the real adventure begins.

(If you haven't had a chance, take a look at the Recruiting Animal tirade on this subject (here's the related radio show). Animal's view is nearly as narrow as the folks he's busy critiquing. He claims on his blog, with some small justification and some greater irony, that blogging has made an insignificant dent in the Recruiting Industry.

While it's a message that will certainly resonate with the buggy whip crowd, the very same thing could have been said about personal computing during it's nascent period (the 1980s). Make no mistake, integrated interactive personal communications are an essential component of the 21st Century Recruiting toolkit.)

This episode will go down in the annals of recruiting radio as a dismal failure unless, of course, it becomes widely referenced as an example for how not to do it. For the latter I am happy to have participated.

A little while ago, I was interviewed on the Recruiting Animal Show, a talk show for the recruiting world. I had a great time doing the show, but you might think the Animal got the best of me… did he?

I don't know if they are going to have naked strippers in there or anything like that but as far as not knowing what's going to be said next and how and why and all those other kind of things... let me just stop and play you a clip from the first episode and you'll see. Audio: Interview on The Recruiters Lounge

Dave, I listened to most of the radio show link you sent me yesterday and I have to say, the reactions and statements on European recruitment (in particular from the host) made my blood boil and made me very sad to be an American.

The overwhelming generalisations of the recruitment landscape here were appalling.... It's things like these that continue to precipitate why Europeans get frustrated with the American egos.

Thanks for stopping by Recruiting Animal. I'm a fan of your show!

Animal's Howard Stern meets Jim Rome style coupled with discussion by former mates at TMP about a new technology that I find fascinating made for the perfect way to blow an hour.

Listen here, for the first 6 or 7 minutes, as he delivers a message to all you job hunters out there, to give you a little hope! Are you dumb or stupid? Go listen to find out. I love the Animal. And the fact that he's laying it all out like this is great, because some people really need to hear it

The Animal, as he is known to his friends, certainly isn't shy about sharing his opinions and was clearly pretty negative about recruiting blogs. A handful of callers, including yours truly, agreed with some of his opinions but tried without much success to straighten out some of his other opinions.... Listen to the show. It is entertaining if nothing else.

For a special holiday message from Harry, the Recruiting Animal, Maureen Sharib (the Queen Bee of Telephone Sourcing), and the WorkFarce ... CLICK HERE. These are some of my favorite people, yet I have never met them in person. What is this world coming to?
I LOVE YOU. h a i r

Listened to your generations recording yesterday and was cracking up.

Can I borrow some of your energy in the middle of the day? How many red bulls do you drink prior to your show? Your audio programs are fantastic!

I can only imagine the face behind the name Recruiting Animal, if he prefers using a weird little puppet as his countenance. The mental image that I conger up when I think of the Animal is of Morton Downey Jr. ...

Morton had a style of speaking that was a cross between yelling and screaming. Until I started listening to the Recruiting Animal Radio Show, I had never heard anyone else capable of such ear piercing annoyance.

Recruiting Animal entertains like no other business blog. If you really want to know what is going on in the recruitment space, you have to read it.

Hi Animal, You do a great job of taking a traditionally dry topic and transforming it into something more entertaining

Building upon the momentum first created by recruiting blogger pioneers like Jason Davis and Anthony and Michael, the Canadian Headhunters, and other popular Microsoft interviewing sites like Chris Sells' Interviewing at Microsoft, we were on our way. 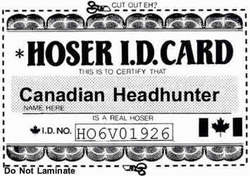