« Consensus | Main | The Most Generous Generation » 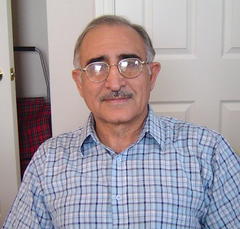 “90% of the people lose money,” says Khan, “and the money they lose goes into the pockets of the 10% making money.”

“It’s beautiful work,” he says. “I can do it any time I want. No business will give you that freedom.”

“Ninety per cent of the people lose money,” says Khan, “and the money they lose goes into the pockets of the 10 per cent making money.”

Wednesday was a good day for Fawad Khan.

He got up shortly before 3 a.m. and headed to a bank of computers in his Mississauga basement. While his family slept, he started trading.

One screen charted the euro in real time. It looked like the seismic readout for an earthquake. Trading in this kind of market, with one’s own money, is not for the faint of heart.

“Then I went back to sleep,” says Khan, 62, a civil engineer who made day trading his full-time job after emigrating from Pakistan in 1999.

It sounds simple enough, but Khan is part of a relatively small group making money in today’s wildly volatile global markets. Most investors are watching their investments, including retirement savings, evaporate. Although marked by frenetic swings, the overall market tendency is down, some 20 per cent since spring.

“We’ve seen a lot of wealth shed away in the last few months. And the ones who lost it are the people who can’t afford to lose it,” says Eric Kirzner, professor of finance at the University of Toronto’s Rotman School of Management.

This lopsided formula rings true to many these days. It partly explains the anger of protesters “occupying” Wall Street for the past three weeks. It might also explain why recent statements on the BBC by an unknown trader — Goldman Sachs rules the world; traders dream of market turmoil and recession — went viral.

“He was honest and forthright in the most scary way,” Rotman’s dean, Roger Martin, says of Alessio Rastani. “This guy was absolutely correct. What he said is, ‘traders like us couldn’t care less whether the economy is doing well or badly. . . all that has to happen is for there to be volatility.’”

There’s nothing of the vulture in Khan. He’s the soft-spoken father of five children who warns against greed and never risks more than $900 in leveraged currency contracts. Yet he too gets a rush from the kind of volatility that has many fearing they’ll never afford retirement.

The small group of winners in today’s market is largely made up of professional traders selling financial products the uninitiated wouldn’t understand, like index futures, or buying bear market exchange-traded funds. They are people making short-term trades while riding the market’s ups and downs.

“High frequency trading is all the rage now,” says Dave Poxon, 45, a day trader in Whitby.

Poxon says “click traders” — buying and selling with a click of the mouse — can’t keep up with those, like himself, who use algorithms to ride the volatility. He said he and two colleagues made a total of about $5,000 to $6,000 (US) a day last week using an algorithm he designed.

There’s no clearer sign of the profitability of volatility than HBP S&P 500 VIX Short-Term Futures Bull Plus, an exchange-traded fund (ETF). It was the most profitable mutual fund on the Toronto Stock Exchange during the last three months, its value rising an eye-popping 178 per cent.

The leveraged fund doesn’t buy and sell stock. It simply tracks the performance of the VIX Index — known by insiders as the Fear Index — which measures the volatility of U.S. stocks. The more volatile the market, the more money it makes.

“Volatility has been a very lucrative asset class to be invested in,” says an official with Horizons BetaPro, which manages the ETF. The official, who didn’t want to be named, stressed the fund isn’t for typical, long-term investors: “If the market isn’t volatile, you would lose gads of money on that ETF.”

Martin argues that big players are increasingly counting on market volatility. He points especially to hedge funds, which in 2008 controlled $2 trillion of assets in the U.S.

In theory, hedge funds reduce risk by placing bets in opposite directions. They should therefore make money no matter which way the market goes. But the way most hedge fund managers get paid magnifies the theory to the extreme, Martin argues.

Managers are paid according to the “2 and 20 formula” — 2 per cent of the assets they manage plus 20 per cent of the increase they generate. Big paycheques are made when markets shoot up or down.

“The more back and forth the better,” Martin says.

As the market swings, the incentive is to “roll the dice” and make a killing. If the bet turns out wrong, the manger has lost other people’s money — including, perhaps, a pension fund’s — yet still walks away with the 2 per cent fee. If the trade works, the millions or billions of dollars the fund earns is at the expense of other investors or companies because the market is a zero sum game, Martin says.

Either way, Martin argues that hedge fund managers are getting filthy rich without adding value or jobs to the economy. He calls it “the very biggest problem with the economy now.”

Sometimes the action raises allegations of crime. Canadian insurer Fairfax Financial Holdings Ltd. is suing a group of hedge funds, accusing them of spreading false information to drive down its stock and then profit through short-selling. (In short selling, a trader borrows shares to sell, hoping to buy them back later at a lower price. If that happens, the trader settles the loan and pockets the difference.)

Short sellers make money when stocks go down, which explains their reputation as vultures. Kirzner argues they help create an efficient market by moving stocks where they belong, pointing to the recent decline in share price of Research in Motion — maker of the BlackBerry — as an example.

It’s a game many are playing now, but one with a history of dire warnings. The legendary short-seller Jesse Livermore made millions betting short when stock markets crashed in 1929. But he lost as many fortunes as he made. In 1940, after throwing back two drinks, he walked into the cloakroom of a swanky Manhattan hotel and blew out his brains.

He was introduced to the stock market while working as a contractor in Pakistan. He built a home for a businessman who was so grateful he gave Khan a quick course on trading.

In Canada, he realized that contracting work involved the same kind of “palm greasing” it did in Pakistan. So he gave it up, studied trading and for the past nine years has been focusing on buying and selling currencies.

He says most days a handful of people will join him in his basement and copy his trades. He doesn’t charge them, unless they get hooked and want to take a course he gives now and then. He urges them to trade with a “stop loss” of $50 or $100 — if you lose that much, stop trading.

So what should a cautious trader do these days?

Unless you’re Jesse Livermore, of course.