The name was @animal.

Shannon Seery was my first follower.

There's lots of proof. You can check this out.

I have over 9,000 followers -- and hundreds - maybe even thousands - will swear they know me as @animal. 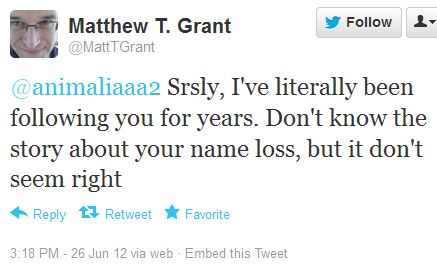 That logged me into Twitter but then I found that my name was now @animaliaaa2 and @animal was on an account that had a picture of an egg, no name and no postings. 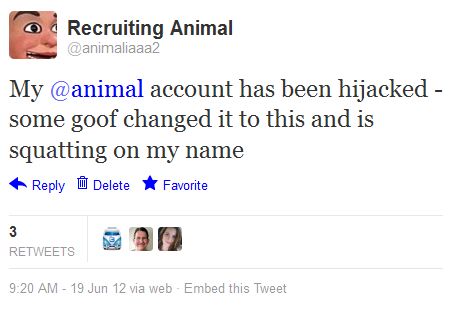 That same day the new owner posted 3 tweets taunting me and I managed to grab one before he deleted them.

Then, he changed his name to Mikey and said:

I wrote to Twitter support as soon as I saw the problem.

Here's where it ended. On Tuesday June 26, 2012 someone named TRex from support@twitter.zendesk.com sent me the reply below:

Glad to hear you're back into your account now! Once a username is freed up (for example, through a username change) that name becomes available for new or existing accounts to claim.

We don't reclaim usernames from active accounts that aren't in violation of our rules or Terms of Service. I'm really sorry, but that username is not currently available to return to your account. Please let me know if I can answer any other questions.

Here is the email he was responding to.

I have been automatically assigned the name @animaliaaa2 I assume by the hacker who took my name.

You told me that @animal is now associated with a hotmail address. That must be the email address of the person who stole my name.

I can get many many people to swear that @animal is my name. You can see yourself that my account - now under the phony @animaliaaa2 name has over 9,000 followers.

Please help me. Don't send me to the password request page again.

Even if the thief abandoned the name and Mikey picked it up that didn't entitle him to stolen property.

It was easy to see that something had gone wrong and Twitter didn't make a legitimate attempt to help me.

As Clarence Thomas said: it was Kafkaesque.

We are at the mercy of social media giants who are not accountable to anyone. You can put years into the development of an online presence and Linkedin, Facebook, Google or Twitter can screw it up in a minute and you have no rights and no one to appeal to but them. You're at the mercy of their whims.

They don't even take phone calls. Call Twitter and see what happens. The receptionist acts like you've committed a crime.

@GirlGeeks woke up one morning and found that Twitter had given her name to someone else. Read about it here -- and here.

You'll see that what @TRex told me about reclaiming names is not true at all. This is from Twitter's Terms of Service.

We reserve the right at all times (but will not have an obligation) to remove or refuse to distribute any Content on the Services and to terminate users or reclaim usernames.

And they did, in fact, reclaim the @girlgeeks name without warning.

@JoanGinsburg wrote about my case here.

@StacyZapar contacted @TinaBhatnagar, the Director of Customer Service at Twitter. Tina emailed Stacy that she had escalated my issue to the Dept of Trust and Safety but nothing happened at all.

@GaryVee said he wd get one of his people to look into it.

@Kazanjy said he wd speak to a product manager at Twitter.

Lots of people sent tweets to @TinaBhatnagar, @Delbius (The Director of Trust and Safety, @dickC (the CEO) and others. Nothing happened. 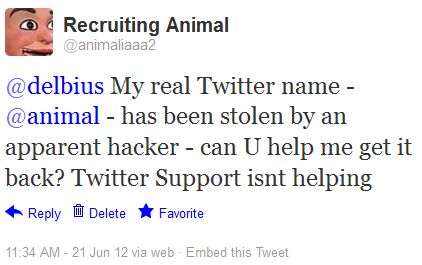 @MissDestructo told me that the same thing happened to a fellow named @Weave. It took 17 days to resolve.

@PeopleShark told me that I'm dealing with a bot. She said the problem will eventually be solved and I sure hoped so.

Did you notice above that my nemesis had a Klout score of 60 -- with a handful of postings and 6 followers from the Recruitosphere?

Shouldn't that have told anyone with a brain that something was wrong? 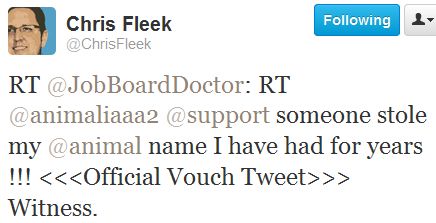 Here are links to comments by my followers and friends.

The URL for this posting is: http://LiberateAnimal.info