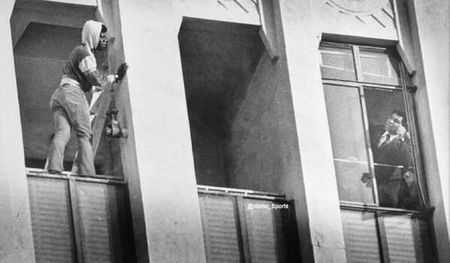 Photo: Muhammad Ali talks a man off a ledge

From: Russell Brand: Revolution -- A Review by Jamie Bartlett (edited)

He cites an experiment, conducted in the 1990s in Washington, DC, where thousands of people meditated together and tested the impact on the area.

Brand notes excitedly that over the two months of the experiment, crime fell by 23 per cent...

I looked into that study as it seems like quite a claim. Turns out it’s never been replicated.

Those who reviewed it were all adherents of Transcendental Meditation.

It also turns out that the murder rate in Washington hit its highest ever level during the experiment.

What’s more, the drop was not an actual measurable drop in recorded crime, it was a drop from what a computer model created by one of the experimenters predicted would have been the crime level had these people not been meditating and levitating and what not.

The Dangers of Blogging

Alexandra Levit spoke to The Recruiting Animal about the potential negative effect of blogging on your career. This was recorded on October 15, 2011 during the Occupy Wall Street movement. She wrote a book about this and related topics. It's called Blind Spots.

How To Call Into The Recruiting Animal Show

Everyone calls in on the same number.

That number is in New York.

For the best sound call on a landline with a handset - not a headset.

Do you know what a landline is? Unfortunately, many people don't.

You can call on a mobile phone but the sound is not as good as a landline.

Sometimes mobile phones screw up the sound for the entire show.

You can use Skype with a headset. There is a Skype button to connect to the show on the show page.

Each episode has its own page. You can find them at http://blogtalkradio.com/animal

You cannot use Skype without a headset. The sound is too awful.

Just go to Google Plus Hangouts and click on the phone icon and dial in.

You have to use a headset though. Not a space microphone.

YOU CAN CALL JUST TO LISTEN

If you cannot listen on speakers or a headset you can call in just to listen. You don't have to talk.

From: The Shazam Effect by Derek Thompson

Our brains are wired to prefer melodies we already know. David Huron, a musicologist at Ohio State University, estimates that at least 90 percent of the time we spend listening to music, we seek out songs we’ve heard before.

That’s because familiar songs are easier to process, and the less effort needed to think through something—whether a song, a painting, or an idea—the more we tend to like it.

In psychology, this idea is known as fluency: when a piece of information is consumed fluently, it neatly slides into our patterns of expectation, filling us with satisfaction and confidence.

“Things that are familiar are comforting, particularly when you are feeling anxious,” Norbert Schwarz, a psychology professor at the University of Southern California, who studies fluency, told me.

“When you’re in a bad mood, you want to see your old friends. You want to eat comfort food. I think this maps onto a lot of media consumption. When you’re stressed out, you don’t want to put on a new movie or a challenging piece of music. You want the old and familiar.”

Perhaps one reason machines haven’t yet invaded the recording room is that listeners prefer rhythms that are subtly flawed.

A 2011 Harvard study found that music performed by robotic drummers and other machines often strikes our ears as being too precise.

“There is something perfectly imperfect about how humans play rhythms,” says Holger Hennig, the Harvard physics researcher who led the study. Hennig discovered that when experienced musicians play together, they not only make mistakes, they also build off these small variations to keep a live song from sounding pat.

Will The Internet Expose Our Flaws?

My introduction to The Recruiting Animal Show of November 19, 2014. It's about 5 minutes long.

Tammy Colson (in the picture) gave us 3 tips about hiring vets.

HOW TO SUCK UP ON LINKEDIN

I'm super-excited to meet you. It looks like we both know how to crush a quota. You are one of my favorite influencers. You were spot on in your post about email marketing.

See my video about Social Media Suck Up Philosophy

Jimmy Kimmel told parents to tell their kids that they ate all of their Halloween candy and videotape the reaction.

Here is their edited version of the results.

From: Richie Polis on Quora: http://tinyurl.com/qhdh5ko

Even if I could define "good attitude" (which I can't), I wouldn't waste my time trying to assess it in a candidate.

Apart from true psychotics, it's generally possible to get good performance out of someone with any sort of attitude, provided he is managed correctly.

When I worked for large companies some of my best performers were people who had been pushed out of other parts of the same company because of their "bad attitude".

The answer was generally some combination of managing their specific issues, coupled with structuring their tasks so that these issues had minimal importance.