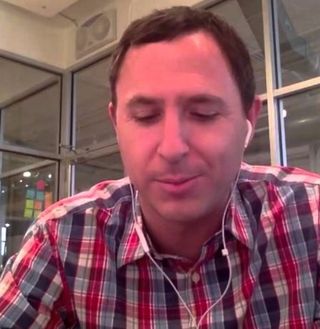 Daniel Chait is the CEO of Greenhouse.io.

Greenhouse is an Applicant Tracking System with a difference.

Daniel believes that the recruiting function inside companies is terribly disorganized.

Here's one of their advertising videos that shows you clearly what they think.

It's funny by the way -- and ironic when you consider that Danny criticizes me during the show for saying that hiring managers are blockheads.

So, anyway, Greenhouse software tells these blockheads - just joking - what they have to do at every step in the recruiting process.

It also tracks the results of various strategies so that the user can compare them and figure out what works best.

Daniel is a great speaker. There are many good videos of him online. In this one, he outlines a "killer" interview process. And this is a good follow up. In fact, if you watch those you don't have to listen to his appearance on The Recruiting Animal Show. But you can if you like.

Did Daniel enjoy his time on the show? On Twitter, he said it was fun in it's own way - which, to me, means no. But, hey, that's show biz. I listened to a bunch his interviews and no one pressed him to justify his ideas. Not that we did that much either. In fact, I'm sorry that Jerry had to leave early because he was very lively in the first part of the show.

Daniel's view of the corporate recruiting function was confirmed by Michael Cox who is the Director of Recruiting at a 500 person company. Alejandro helped out with the interview and Maureen Sharib, as usual, was the only caller with the guts to participate in the song.

PLAY - Song - Love Me Like You Do - Chait, Sharib, Animal

PLAY - Daniel Chait - How To Test Candidates For Skills

PLAY - Daniel Chait - How to Identify a Problem Solver

PLAY - Dan Chait - Do you always need a problem solver 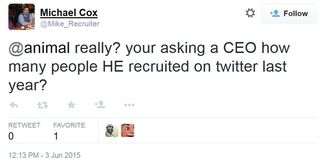