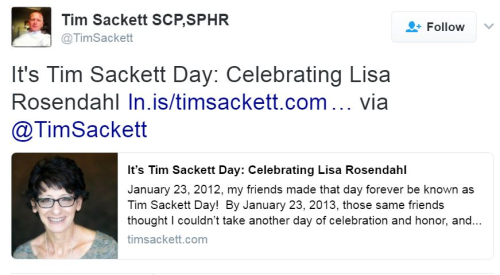 Hello Dahly, This is @animal, Dahly.
It's so nice to see you up where you belong.

Man, sometimes I wake up in the morning and ask myself: Is there anyone in the arts world as interesting as Lisa Rosendahl?

And then I tell myself: wrong Lisa Rosendahl. You don't know her. You know Lisa Rosendahl the builder of men. But I know that's sexist. Lisa doesn't build men -- or women. She builds leaders. And leading is important.

The president of the United States just said that he wants to give power back to the people so the people have to be to be ready to lead their own lives, don't they?

I see your hidden strengths, she declares. "I see confidence, ownership and strength where it wasn't visible before. And that's the leadership sweet spot for me. It's not a title. It's not my name in lights. It's creating possibility where none existed before." Wow! I need her to be my second mom.

And, you want a surprise? All that leadership stuff is just a sideline. In everyday life, Lisa is the Acting Associate Director of the U.S. Department of Veterans Affairs. Yes, she's a leader herself. And, Lisa, although I'm not in the military or an American, today, on Tim Sackett Day, I salute you.