Our good friend, Jeremy Roberts, Head of Sourcecon, was on The Recruiting Animal Show on July 16, 2014. Here's an 8 minute clip.

How to find women on Linkedin. - Glen Cathy on Diversity Sourcing

Jeremy advises us to add a list of relevant names to a boolean search for the other relevant information. You can see an illustration below. 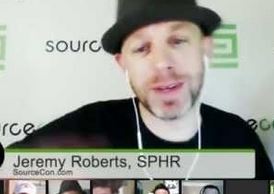 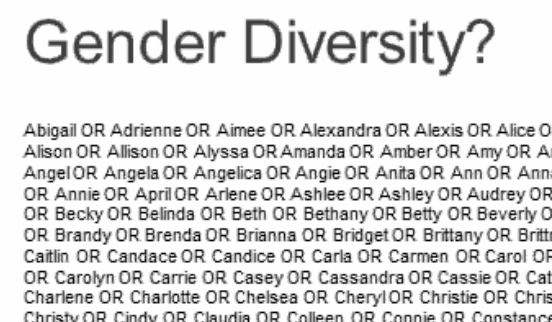 From: The New York Times (edited)

Ms. Quinn summoned Ms. Gotbaum to an office nearby and, with little warning, began shouting at her in increasingly angry tones about appearing weak in front of other lawmakers.

“You were like Bambi in there!” Ms. Quinn exclaimed, slamming her hand on a table for emphasis...

As she pursues a high-profile bid for mayor, Ms. Quinn, has proudly promoted her boisterous personality, hoping that voters will embrace her blend of brashness and personal charm.

But in private, friends and colleagues say, another Ms. Quinn can emerge: controlling, temperamental and surprisingly volatile, with a habit of hair-trigger eruptions of unchecked, face-to-face wrath.

She has threatened, repeatedly, to slice off the private parts of those who cross her.

She is sensitive to slights: When a Queens councilwoman neglected to credit Ms. Quinn in a news release, the speaker retaliated by cutting money for programs in her district.

Ms. Quinn’s staff, concerned that angry tirades could be overheard by outsiders, added soundproofing to her City Hall office. Wary of her temper, they are known to ask one another: “Did she throw up on you today?” 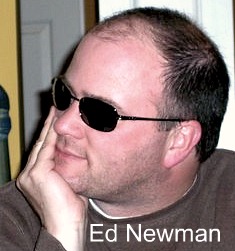 My new good pal @NewmaEd claims that Affirmative Action has been transformed into Diversity Recruiting.

Diversity Recruiting values minority thinking rather than racial or ethnic background or gender.

He explains his thinking on his blog, The Accidental Entrepreneur.

And here he is discussing it on The Animal Show.

A woman was fired after six weeks on the job. She took her employer to court.

According to Rex Murphy, the biggest bone of contention was the food the employee brought for lunch. She warmed it up in the microwave and her employer thought it smelled too much.

The Ontario Human Rights tribunal decided in favour of the employee. The argument qualified as a case of discrimination based on race, ancestry, ethnic origin and place of origin.

ordered fines and costs totalling $36,000 against the employer, Ms. Tefler. Since the accused had little money, the lawyers working for the complainant decided they would go after the woman’s house — have it auctioned off

From Shalom Auslander in The Guardian

In Arles, we walked behind an American couple who were lamenting the culture of consumerism plaguing the United States.

In Canada, an elected official could never speak like this publicly:

"If Sarah Palin isn't enough of a reason for you to get over whatever your problem is with Barack Obama, then you damn well had better pay attention," said Hastings.

"Anybody toting guns and stripping moose don't care too much about what they do with Jews and blacks. So, you just think this through."

Ms. SHRIVER: Well, and I'm going to say when I speak today at the memorial that when I first came to NBC, I had just been fired by CBS.

So I came not knowing really anybody, and Tim came up, put his arm around me and said, `Look, we're both Irish Catholics. We're both educated by the nuns and the Jesuits. There aren't that many of us in this business. So if we stick together, we'll be fine.'

Daily Howler gets downright nasty about it:

After the memorial service, honorary Irishman Howard Fineman rolled his eyes at the silly tale—and... blurted something out that normally never gets tattled:

FINEMAN (6/18/08): I had to laugh when Maria Shriver told the story about when she came to NBC and Tim went up to her and said we’re both Irish-Catholic and there are not many of us here so we got to stick together. At that time, NBC was run by Jack Welch at General Electric and Bob Wright. And so it’s basically a Holy Cross conspiracy, from what I can tell.

Under Welch, for whatever reason, NBC News increasingly became an East Coast Irish Catholic boys club.... Joe Klein alluded to something many people have noted; it was the Irish Catholic branch of the insider press corps which most completely lost its mind about Bill Clinton’s disturbing ten bl** j*b*.

A Chilean-born photographer in Toronto has been charged with a number of counts of sexual assault. His boss, the editor of a local ethnic newspaper, had tried to dismiss the charges as the product of a "cultural misunderstanding" because the accused "likes to hug and kiss everyone". As more women came forward with similar claims this explanation became untenable. -- Toronto Star

Animal: Suzy, tell us about some of your tough searches.

Suzy Tonini: Well, when I first started I was asked to find a C-Level candidate that had to be Hispanic or African-American.

Animal: Who's phone is going? Come on, this is a show here! Suzy, you have to shout over the phone. Sorry, what did you do?

Suzy Tonini: I emailed all of the diversity recruiters I could find on ERE and asked them for advice.

Animal: So what did they tell you to do?

Suzy Tonini: Well, I learned that Hispanics are in the southwest and Florida

Suzy Tonini No, but they told me to search there instead of, for instance, New York.

Suzy Tonini I learned to type phrases like "she said" into the search engines. That's going to render someone who has been covered at a trade show or conference who is a female.

Animal: Aren't you going to get a lot of garbage, as well?

Suzy Tonini: I had another set of keywords, too.

Animal: Did you have to ask people what their complexion looked like?

Animal: How did you know if you are on the right track?

Suzy Tonini: You gather that from information in their profiles. For instance, if someone belongs to an association like the National Association of Black Accountants.

Animal: So, if I'm a job-hunter and I want someone to be able to identify me, I should join The Association of Recruiting Call-In Radio Hosts, right?

Peter Gorrie, The Toronto Star's Environment Reporter, wrote an article entitled, "Why Are Greens So White?". The subtitle is "Eco-Apartheid". Here are the key ideas:

1. Environmentalists are failing society because they don't spread their gospel in a way that will attract recent immigrants.

2. Older Canadians are morally obligated to establish cultural hegemony over newcomers from the third world.

3. In the new language of inclusion, apartheid doesn't mean shutting people out, it means not forcing them to come in.

4. If visible minorities are not well-represented in an environmental group, it is a sign that the established culture has sinned.

If Gorrie had cast his argument in purely practical terms, it might have made sense. But the use of the word apartheid in this context is at best moronic and at worst, disgusting. He himself admits that new immigrants are too preoccupied with economic issues to give much thought to conservation which means that this is not in any way an ethnic issue nor a racial one.

One can only suspect that The Toronto Star likes to fan the fires of group tension where none exists in a way that allows it to posture as the guardian of the underdog. Thus "Immigrants are too busy for conservation issues" becomes "Canadians shut immigrants out of conservation groups". Mister, please!