Nick Livingston is the CEO of Honeit.com.  He was the guest on The Recruiting Animal Show on June 17, 2015.

A few weeks ago, Daniel Chait told us that while the golden rules of recruiting are very well known, lots of companies don't use them.

As a result, interviewers are unprepared.  They miss important questions and don't take notes so when they arrive at the selection meetings they have only a foggy memory of what was said.

Honeit tries to solve these problems by having you conduct the interview via their website.  It hosts the interview questions and records the interview.  This way, interviewers know what to ask and they have a record of what was said.

If the candidate has to go through a number of interviews staggered over a few days or weeks, subsequent interviewers can listen to the previous recordings and, then, hone in on the issues that remain unresolved.

A key feature, here, is the clip-making function.

Before asking about an important topic, the interviewer can press a button to start recording that part of the conversation as a separate clip. When the topic ends, she presses another button to end the clip.

When these short clips are available and their topics labelled, the next interviewer will not have to wade through an entire recording, including chit-chat, to get to the material that concerns her the most.

There is even a chance that she might not have to conduct another interview at all and this is the way, Nick claims, Honeit can speed up the interviewing process.

He is targeting both third party recruiters and corporate recruiting departments and you can try it for free at Honeit.com. (The video feature only works with the premium account).

Before founding a start-up, Nick was a headhunter and a corporate recruiter (at MTV and TubeMogul) so we also discussed a lot of plain old recruiting topics -- though Alejandro complained about that (and Maureen supported him). The song was terrible. Pathetic is a better word. My intro was stilted for some reason. I seemed sort of confused (and I was). And Jerry wasn't around so there was no aftershow.

Trish Steed McFarlane: Addicted to Evernote. I have it on Android phone and tablet and use that for all conference notes now too. Also on my MAC so it's compatible everywhere.

Kimberly Patterson: I use Evenote

Melissa Fairman: I love, love, Evernote. I cannot say enough how great that service is.

Will Carroll: Evernote. Literally can't live without it now.

When Evernote CEO Phil Libin was faced with a cash reserve that would last only two weeks, and the US's record recession was unfolding before his eyes, he decided to shut down the company. He simply couldn't pay the bills. But one e-mail, from a soon-to-be investor, popped into his inbox at 3 a.m.

Sooooooooo, I don't know if you know this but they've invented this wonderful invention where you can write me your request (at your convenience) and I can write you back my response (also at my convenience) so why do we do this thing where we interrupt each other WITH NO WARNING and then leave long messages that require me to log in, gather the information and attempt to call YOU back, thus interrupting your day, to achieve the same thing. ‪#‎crankyoldpersonHATESunscheduledphonecalls‬

Ryan Kovach I HATE phone calls. I truly hate them with a passion. Text or email. Period.

Stephanie Schnick Preaching to the choir! At PwC we (if at all possible) IM people first to ask if it's a good time to chat, and if not, agree on a time to connect. Deloitte's culture is this way as well. I schedule all phone interviews in advance because I want to give my undivided attention. Random phone calls - especially work-related - make me insane.

George LaRocque You can answer your phone at your convenience, if at all. Have an outgoing message that tells people you prefer email. Listen to your vmail at your convenience. And email your response, or a meeting invite, instead of calling back ad hoc. If they don't make your time important, that doesn't mean you can't.

Jerry Albright Always nice to see a discussion among: recruiting? sales? marketing? people letting the world know how to not reach them. I find it oddly fascinating.

Chris Russell took a few boolean search strings and wrapped an interface around them so you don't have to write them.

Talent Xray is not for advanced boolean searches.

For Linkedin & Twitter searches he uses Bing. For G+, Google.

You don't have to log into those sites. Talent Xray lets you enter keywords, then passes the query thru to Bing or Google to deliver search results.

For the best experience just use a few keywords.
All searches can be saved for later or shared via email.

Wifi, along with the Internet it delivers, along with the devices that receive it, are absolutely freaking amazing. They are improving human life, all over the world, in fascinating, measurable, journalism-friendly ways.

@TheExpertResumeMan told me that I was featured in a video demo for the new Dashboard feature on @TheSocialCV and it's true. Watch it here 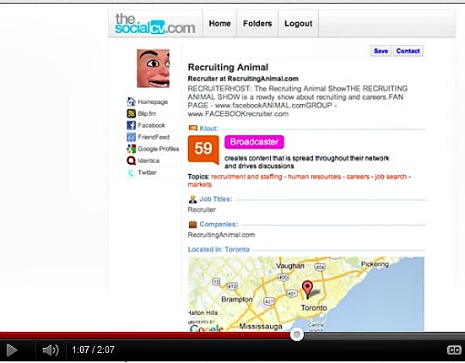 We are flooded with cloud storage companies offering a few free GB to give us a taste.

Note: Rogers Cable now offers unlimited storage of email. But they warn that they will interfere if you are obviously using it for something other than email.

A concern with free storage is the abrupt demise of the company offering it. Or even the abrupt end of the service.

Every email address contains 3 parts. Let's call them the prefix, the @ sign and the suffix.

In bozo@gmail.com, bozo is the prefix and gmail.com is the suffix.

You can add "+anyword" to the prefix.

If my email address was bozo@gmail.com, I could use bozo+amazon@gmail.com on Amazon.com and bozo+facebook@gmail.com for Facebook.

Then I could set my email software to filter them into different folders based on the +anyword part of the address.

Many websites, however, won't allow you to sign up with a "+" in your email address, including Google Alerts.